Case record form (CRF) is a wonderful and necessary tool used in clinical trials to collect data from each participating patient. CRF (also, referred to as case report form) has historically been on paper (unlike electronic ones these days). Traditionally, something like carbon copy paper has been used, such that one sheet can be added to the Trial Master File (TMF). Paper CRFs are still being used within smaller studies or studies in some geographies. But, mostly, there is a push and inclination to use electronic CRFs (eCRF) or Electronic Data Capture (EDC) in larger / global studies. [1][2] 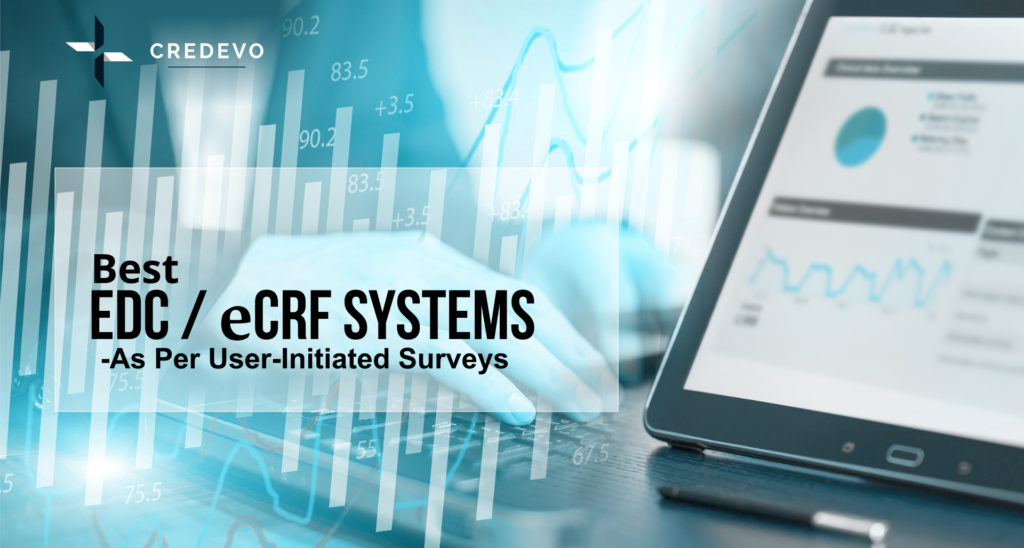 What are the advantages of electronic data capture (EDC) or eCRF?

Some are listed below. Do you want to add more?

An excellent presentation from Liora Bosch of Omrix Biopharmaceuticals, a J&J company, provides a great case for eCRF utility, key considerations, and challenges. [1][4][5][6]

What are common EDC systems available in the market?

There are different kinds of EDC systems developed by various companies, and more are still coming up.

Somewhere in the western world, a clinical trial team of an organization was looking to buy an electronic data capture (EDC) system for their clinical trial projects. There were many choices in the market and efforts were on to seek feedback on previous experiences with these products. One of the team members got an interesting thought to seek this feedback quickly and much more reliably. Why not ask other clinical researchers on a social media group? This generated a pool of responses containing unbiased feedback of user experience with currently marketed EDC systems.

Here are some of the known EDC systems in the market.

While, most of these EDC systems bring advantages suggested earlier, their acceptability in the market differs significantly.

Do you have any query related to EDC/eCRF? Or

Are you looking to buy an EDC/eCRF or any other tool?

User experience – a key factor in acceptability of eCRF systems

User experience – the overall experience of a person using a product e.g. EDC or eCRF, especially in terms of how easy or pleasing it is to use, drives a user to like or dislike that product.

It generates perceptions of system aspects such as

for that particular user.

This means, that the acceptability of a product, including EDC systems, can be a sum-total of various aspects of human-computer interaction and product ownership.

An EDC system needs to be easily taken up, understood, and utilized fully by the user. The learning curve should be acceptable and not too steep.

Clinical researchers are aware and the word spreads fast

Considering the complexities of clinical trials, most of the users in the industry undergo a very fast realization of how user-friendly a system is. With a need to use these systems quite frequently by different kinds of users – clinical study coordinators, investigators, clinical trial monitors, etc to name a few, any product is likely to generate an impression rather quickly.

What becomes more interesting is how this impression spreads across the industry.

Any prospective buyer (clinical research organization or a trial sponsor) is likely to take feedback from various resources before opting for their best choice. Some of these resources could be

It’s enough to say that a good product is expected to gain a favorable word going around, rather quicker than a not-so-good product getting an unfavorable one. Thus, tapping the impressions of users as they come, is of great importance.

Click here to explore ways to accelerate your clinical development

Story of a user-initiated survey on EDC

Somewhere in the western world, a clinical trial team of an organization was looking to buy an electronic data capture (EDC) system for their clinical trial projects. There were many choices in the market and efforts were on to seek feedback on previous experiences with these products.

One of the team members got an interesting thought to seek this feedback quickly and much more reliably.

Why not ask other clinical researchers on a social media group?

LinkedIn, Facebook and other social media have become virtual community centers for people. They are not only able to stay in touch with their friends, colleagues, and known persons but can connect with various other (unknown) people with similar interests by joining a social media group.

Within clinical research too, there are various groups formed to share information, knowledge, and, very often, a smile.

On a fine evening, one such group received a question from a group member – “What is the best EDC system you’ve ever used?”.

This question generated a flood of responses from many group members. Many people shared what they thought was the best EDC system. A lot of them shared their experiences with such products with more elaborated comments.

Series of responses received for this survey generated pooled unbiased feedback on various marketed EDC platforms and eCRF systems. Considering the importance of early understanding of user experience, this feedback could be very interesting for clinical researchers, as well as developers of such EDC systems.

Results of the survey

An analysis of responses received for this survey was performed. All products commented upon by the users were listed down. Responses/comments/feedback on these products were also listed down and classified into 3 categories.

A total of 207 responses were received at the time of preparation of this article. Here is the result of the analysis performed using the above-referred categories. 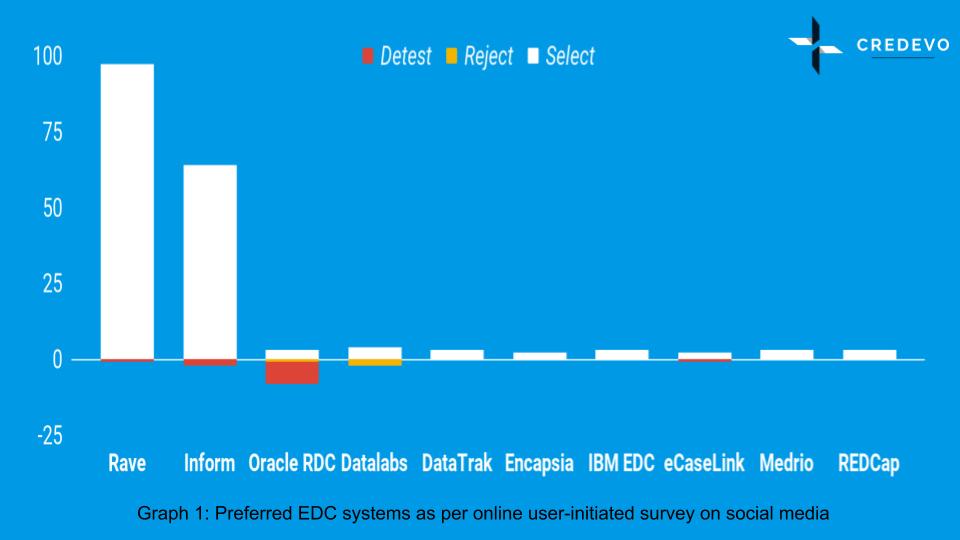 As evident here, rave from Medidata and Inform were the two products preferred by the majority of respondents. Roughly half of the responses indicated a favorable view of Medidata. While more than 30% of responses favored Inform.

Oracle RDC was the only product that had more negative responses than the positive ones.

Results of another survey on EDC systems other than Rave

Independent of the above-referred survey, another survey was also performed by a different user to find recommendations on products other than a rave. Since Rave stood out as an undisputed winner among the respondents in the earlier survey, findings of the second survey become important to assess the second choice for an eCRF system. 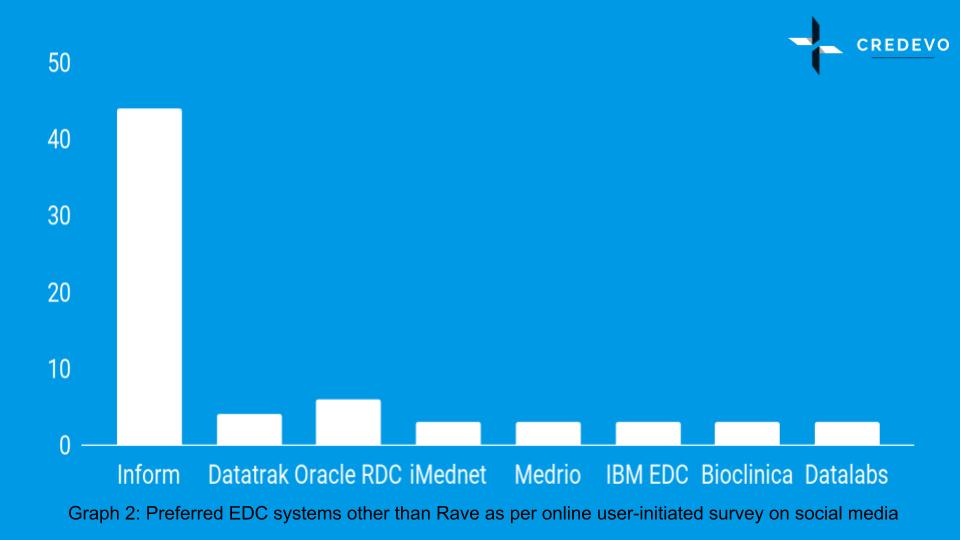 Inform again stood out as the clear choice of EDC platform if Rave is not considered by the users. Among a total of 93 responses, there were 44 positive responses for Inform, nearly 50%.

However, it is also interesting to note that the second choice of users after Inform, is Oracle RDC here.

Rave and Inform – two best EDC platforms in the market

Based on these two surveys, it is apparent that Rave and Inform are preferred by most of the users in the industry.

Rave has been an undisputed user in the market for long. It has been taken up for use in clinical trials by much big pharma and CROs.

However, it is hard to put Inform at second rank, given the reported fact 3 that it has more successful submissions to the FDA than any other EDC system – including Medidata Rave.

Do you use EDC, softwares, tools and systems in clinical development works?

If yes, let’s discuss the ways to accelerate your development process

Provide the details of your current work below