Thailand is the second largest healthcare market in Southeast Asia after Indonesia making up roughly about 20% of the region’s expenditure. 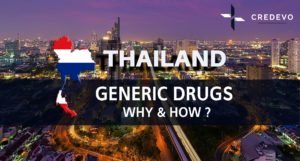 Thailand’s pharmaceutical market is the eight largest in the Asia Pacific region and considered as one of the largest and most developed in ASEAN.

Why choose Thailand as your generic drug market?

Thailand is a leading Hub of Generic Drugs for its

Thailand Vs other ASEAN countries

Are you looking for regulatory support in various stages of drug development? write to us at helpdesk@credevo.com or provide your query in the form below

Some of the Foreign pharmaceutical companies also manufacture products in Thailand .

The Pharmaceutical products with the same active ingredients and the same dosage forms as those of the original products, but manufactured by different manufacturers are considered as Generics

Applications are made to the FDA

Medicines with the same active ingredients, doses and dosage forms as those of the new compounds registered after 1992 are considered as New Generics 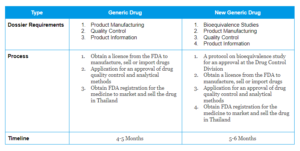 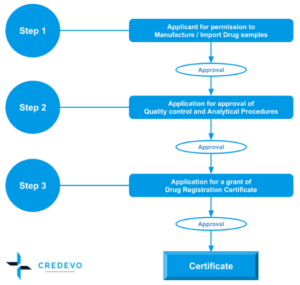 Requirements for drug registration in Thailand

Have queries on drug registration’s requirements?

Know more from our experts. Shoot your questions to us.