Rosacea is a common chronic inflammatory skin condition that causes redness and visible blood vessels on face. It may also produce small, red, pus-filled bumps. Rosacea can be mistaken for acne, eczema, or a skin allergy.

In US more than 14 million people are estimated living with Rosacea.

Rosacea is a long-term skin condition which results in redness, pimples, swelling, and small and superficial dilated blood vessels and typically affects the face. Most often the nose, cheeks, forehead, and chin are involved.

In some rare cases the oil glands (sebaceous glands) in the nose and sometimes cheeks become enlarged, resulting in a buildup of tissue on and around the nose, a condition known as rhinophyma.

What are the Signs & Symptoms?

The following signs & symptoms persist in most cases

There are several types of Rosacea based on symptoms

With time, people who have Rosacea often see permanent redness in the center of their face.

The causes of Rosacea are not know but the risk factors are believed to a family history of the condition and environmental factors.

Rosacea normally occurs in any age group but most in middle aged women having fair skin.

How it is Diagnosed?

There is no cure for Rosacea. Signs & symptoms can be controlled by treatment, generally with some of the antibiotics as oral & in form of creams, eye drops if eyes are effected and laser surgery in some cases, remission is common in Rosacea

The treatments are generally measured as

Some of the medication show improvements and are included in the treatment line such as Ivermectin, Azelaic acid creams, Brimonidine, Doxycycline, and Isotretinoin by mouth. Each category of drug have their own typical mechanism in reducing symptoms

Laser surgery is also used in some conditions that damage the capillary walls and make them absorbed by the body’s natural defence mechanism. Laser treatment may require repeated sessions.

Feasibility study on Rosacea is ongoing on Credevo. 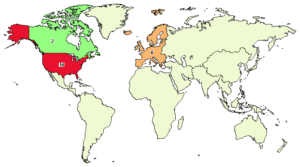 Just provide your email below and further details will be sent to you. Don’t worry, your email will not be published or shared.